My oldest is obsessed with natural disasters.  And when I say obsessed, I mean obsessed.  If you have a conversation with him chances are within a few minutes some kind of natural disaster will come up.  He has such a passion that when he goes up he wants to be a storm chaser or meteorologist.   It’s amazing the things that he already knows about weather.  My husband was joking about the wind and how it’s made, well my son corrected him and told a very detailed answer about how wind is actually formed.  It was very intelligent for a 10 year old.  Anyways, because he loves natural disasters so much I threw him a natural disaster birthday party for his 10th birthday.  We had SO MUCH FUN!!  Seriously, the kids loved it.  It’s so nice when the kids get older, you give them a craft and then they can do everything themselves.  For the party we had four different science experiments/crafts that resembled natural disasters, including volcanoes, and earthquakes, tornado/hurricanes.
And now it’s time to check out the party!!  I included a bunch of videos to watch because they show the pure joy in the kids’ faces.  They all had a blast. 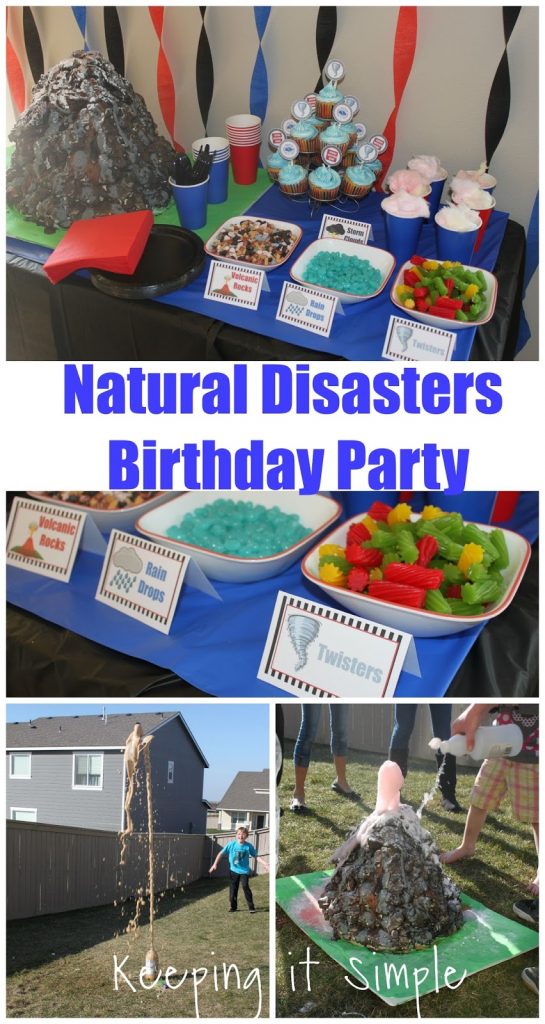 Here is the table scrape.  We just did some cupcakes and a few treats that were natural disaster themed. 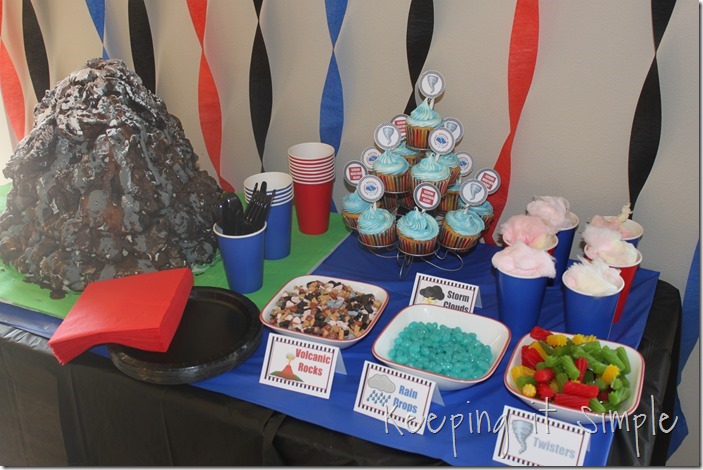 We had licorice pieces are twisters, blue jelly beans as rain drops and rock candy as volcanic rock.   You can get the printable here. 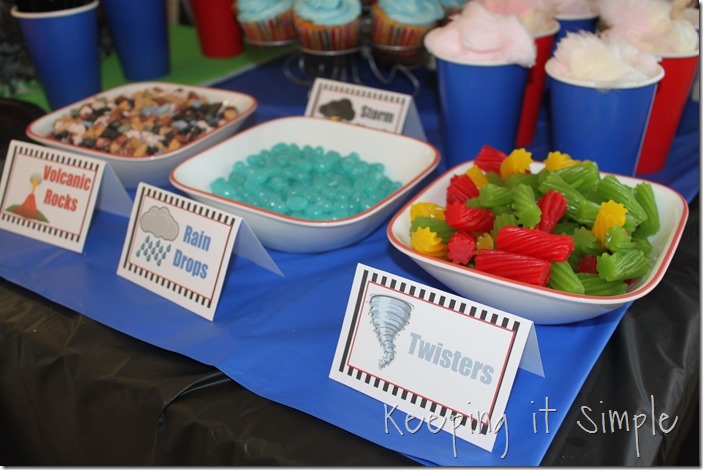 I made some fun cupcake toppers for the cupcakes.   You can get the printable here. 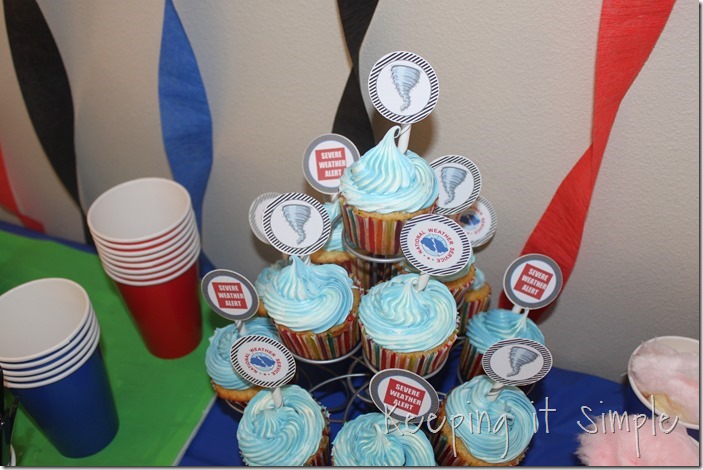 And lastly we had cotton candy as storm clouds. 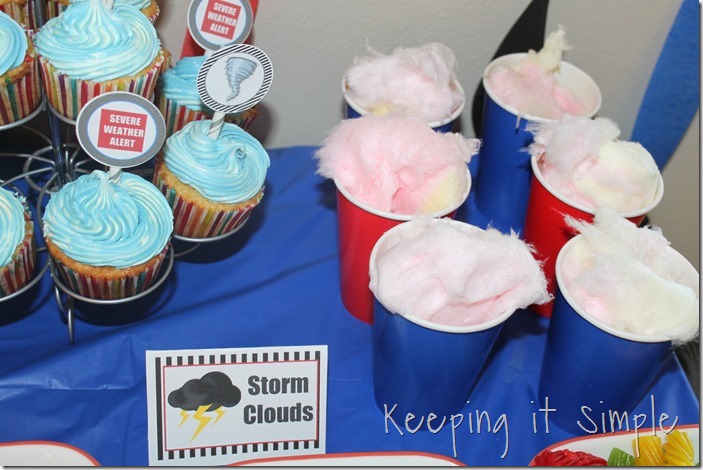 For decoration (and for an experiment later), I made a big volcano!  For the tutorial on how I made it click here. 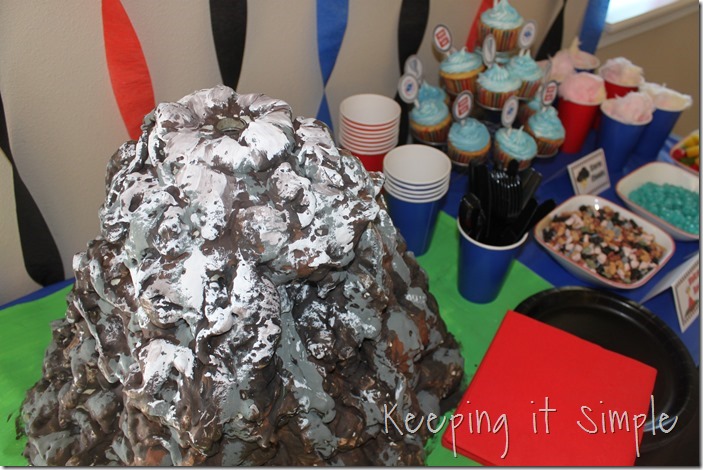 For the first craft/’experiment, I had all the kids build skyscrapers with tooth picks and marshmallows.  And their foundation, it was jello.  Before the party I made several batches of jello and put them into tin pans.  I didn’t put very much onto each pan, just enough to cover the whole pan. Then I refrigerated them over night. 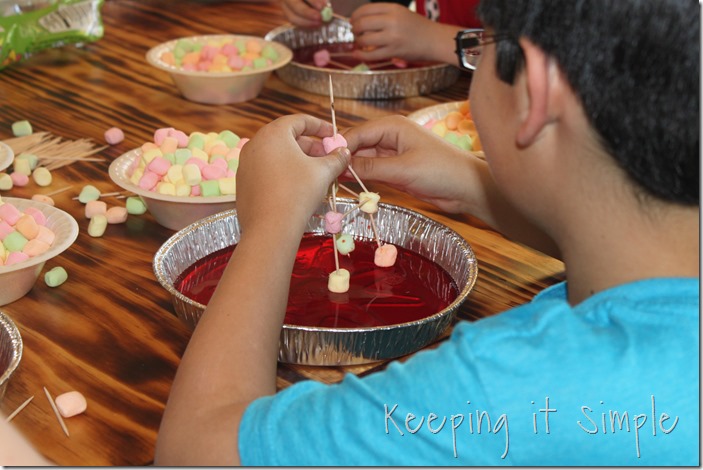 The kids loved this.  Who doesn’t love to build with food?  These girls got very creative and together built a bridge. 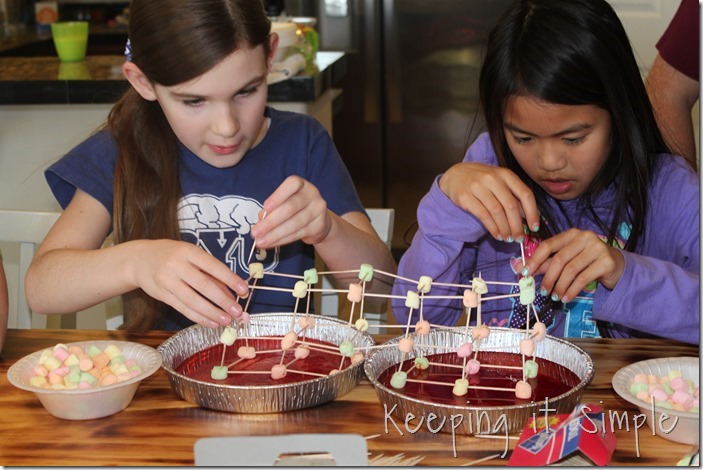 It was even a great craft for my little girl to do. 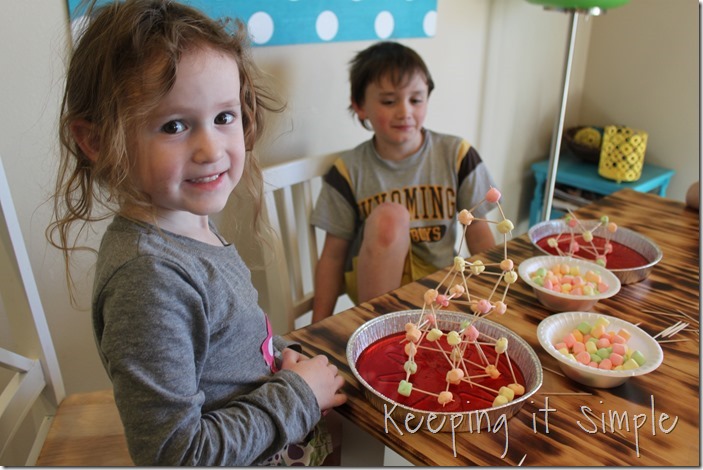 Once all the kids were done building, we wanted to see if their buildings were earthquake proof, so they went through an earthquake :).  Luckily, all of them survived.  And afterwards, they all got to eat them!


Next came the explosions of Diet Cola and Mentos.  If you haven’t done this, you have too!  It’s awesome.  All you do is put some mentos into a 2 liter bottle of diet cola and then step back and watch the explosion. 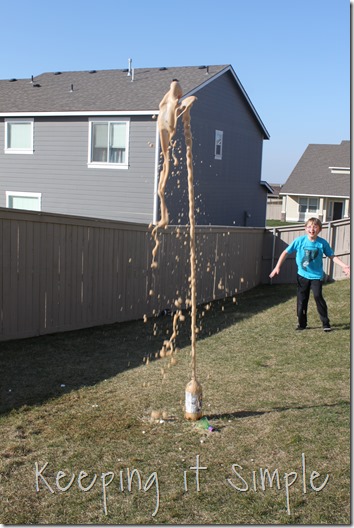 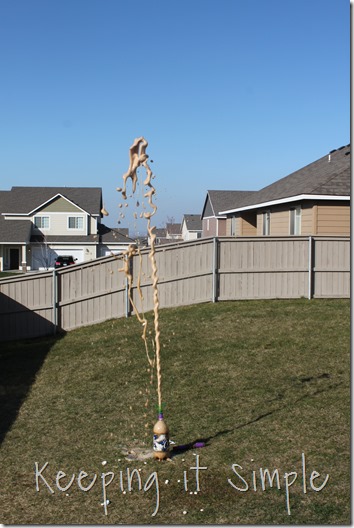 We let everyone do their own experiment.  So worth it because everyone loved it. 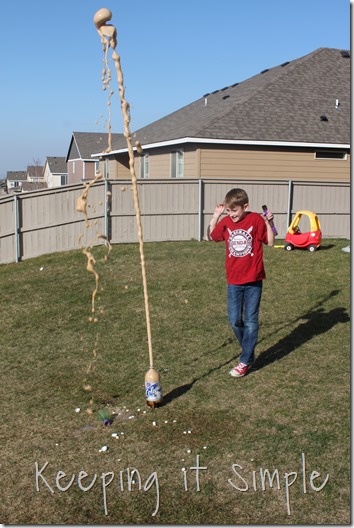 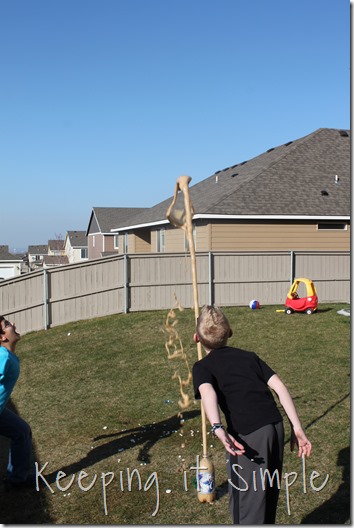 The pictures don’t do these justice, so here are a few videos of it.  It’s so awesome!

Next we had another volcano, one with baking soda and vinegar.  I made the volcano and put the vinegar into a 2 liter bottle (that was in the volcano) and we put baking soda into it. 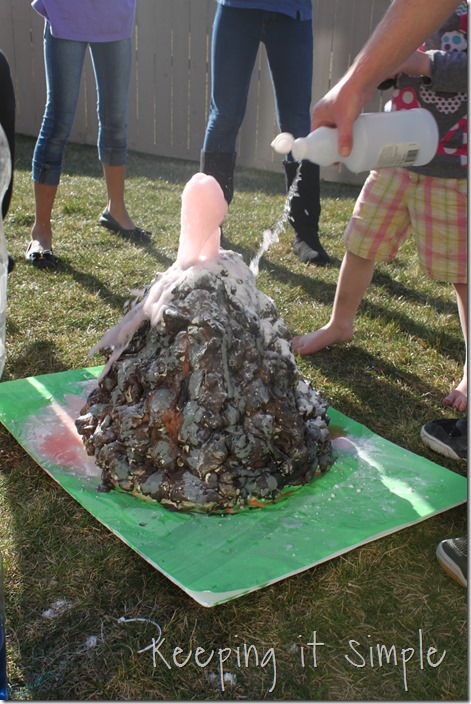 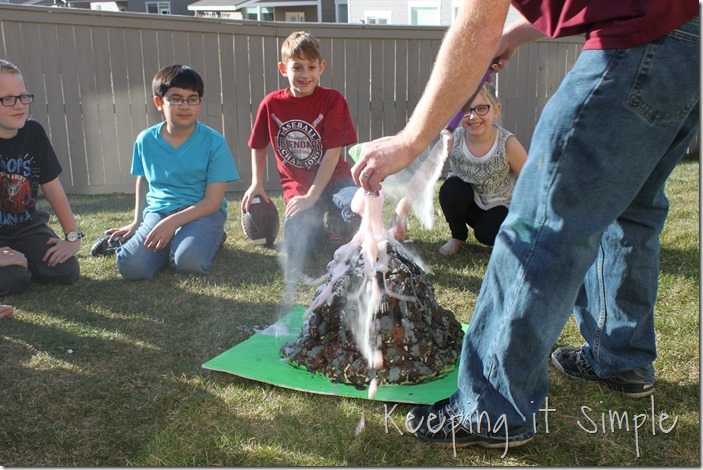 Here it is on camera.  It was pretty fun to watch.

And lastly, the last experiment for the party was making a tornado/hurricane with 2 liter bottles.  Once again, we let everyone make their own (we were drinking a lot of pop before this party 😉 ).  All you have to do with this is tape two 2 liter bottles together with duct tape (after you fill on half full).  Then you twirl the water and watch as it makes a tornado. 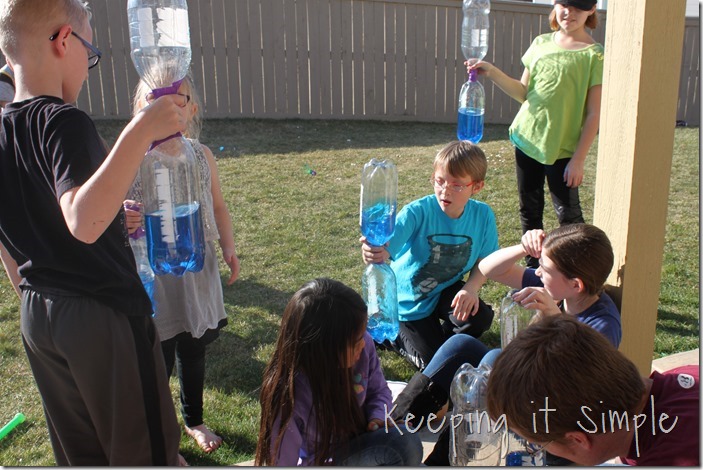 Here is what it is supposed to look like: 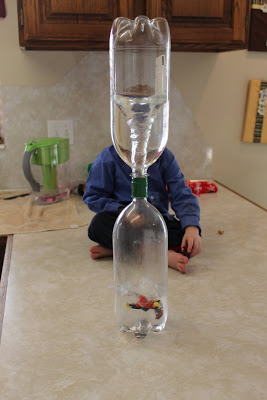 I also made up a fun invitation for the party.  Here it is :).  And you can go here to print it out. 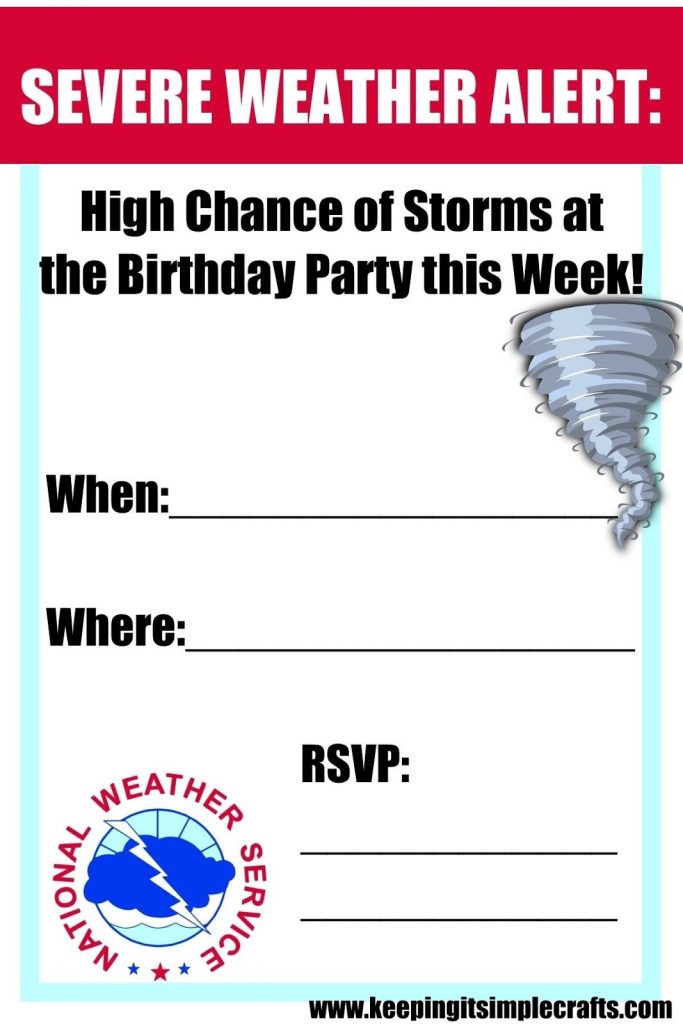