Disclosure: I was given product to create with.  All opinions, ideas and content are 100% my own.
My third son turned 5 this year!!  He had a train birthday party last year but he requested another one again this year.  So this year I thought it would be fun to give him a big party, especially since it was the big 5 one!   For the majority of the supplies, I shopped at Oriental Trading Company.  They have soooo much stuff, I was so excited to see that they had some awesome train things.  They also have a bunch of fun colors, so it was so easy to plan the party. 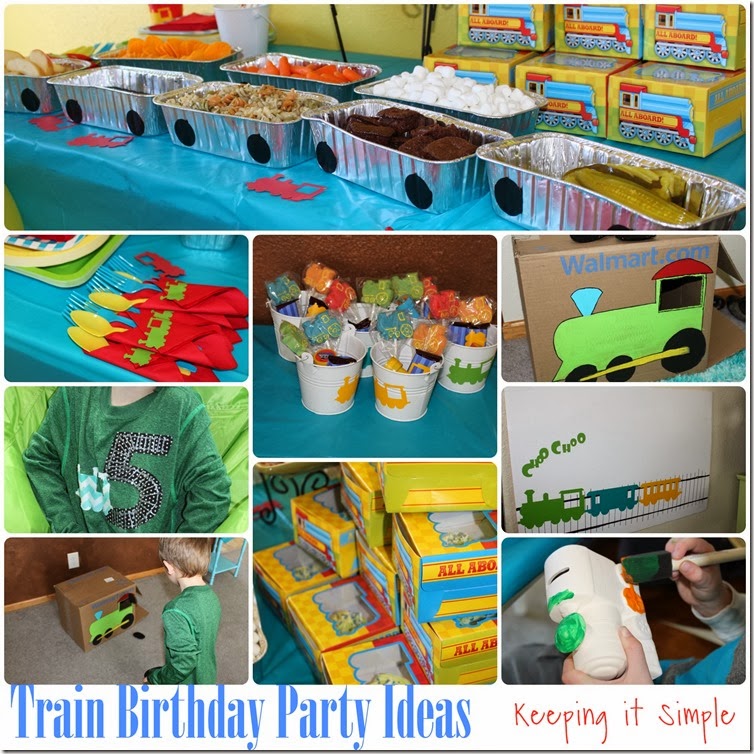 For the food table, I used some foil bread pans and turned them into a train.  It was super easy to do, all I had to do was put wheels on to them.  For the food I went with things that we my son’s favorite foods.  His favorite chips, Jell-O, apples, pickles, pasta salad and more.  These all things that he just LOVES! 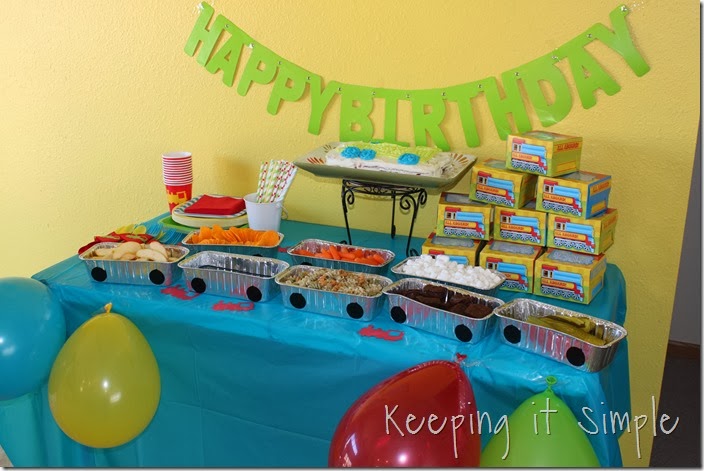 I fell in love with these awesome cupcake boxes with the train design.  I had the kids have cake and then set them home with a cupcake in the box.  Seriously love these! 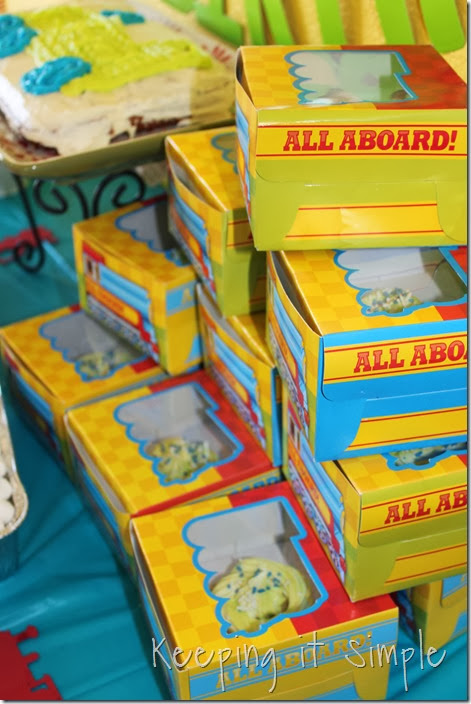 Here is the food train.  I always was trying to go with a food that looked like cargo of a train, like marshmallows that look like smoke.  And brownie bites, that is supposed to look like coal. 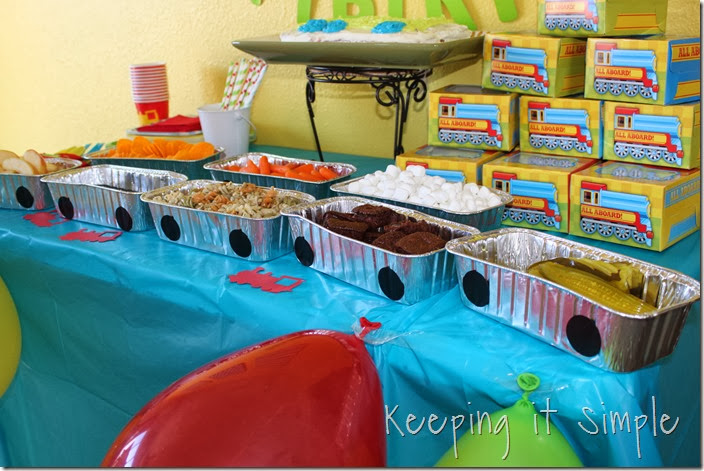 I ordered some fun colored tableware and then wrapped the forks and spoons with a napkin and held it together with a vinyl train. 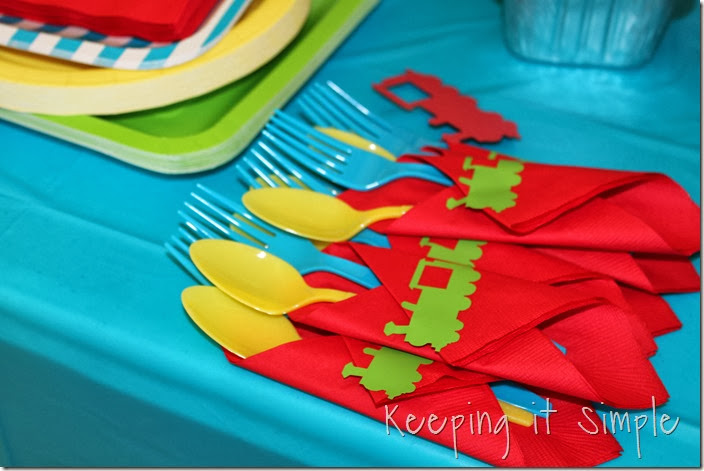 I also put a vinyl train onto the cups.  The plates, napkins and cups were from Oriental Trading too.  The blue striped plates just reminded me of trains. 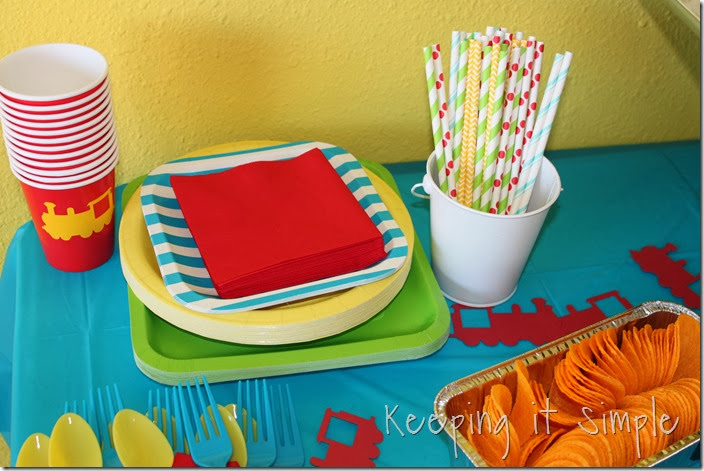 And here’s the cake.  Very simple but the kids sure enjoyed it! 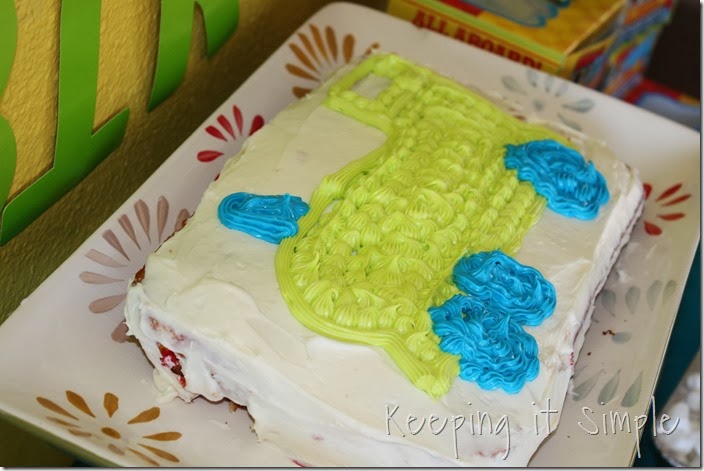 For the party favors, I used some white pails and filled it with stampers, train suckers and candy bars. 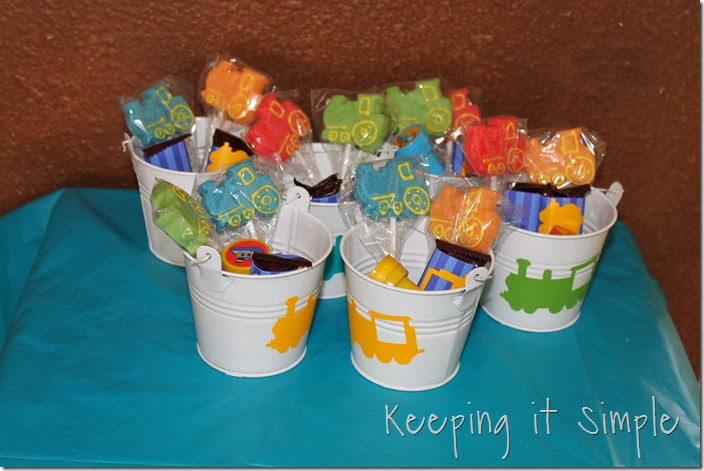 Here is what was in the inside. 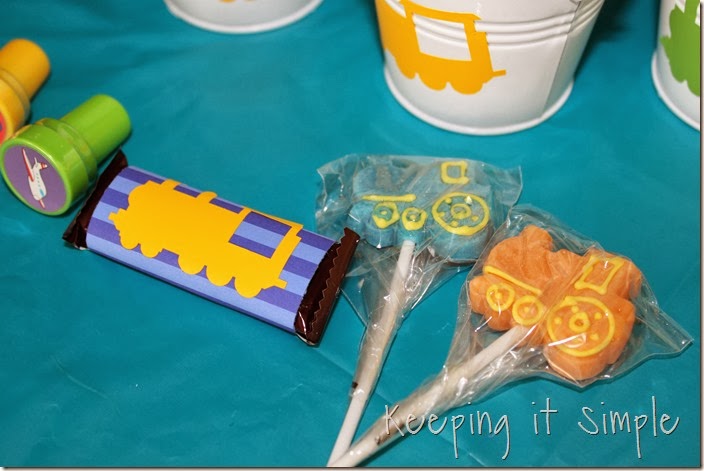 Now for the games!!  The first game we did was pin the caboose on the train. 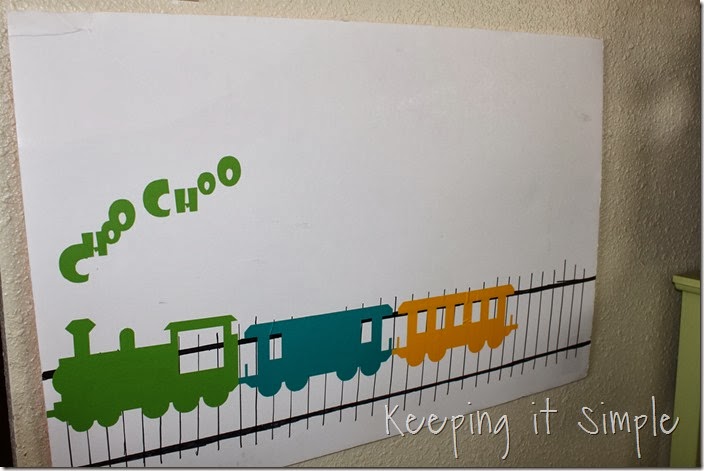 The kids had fun doing it. 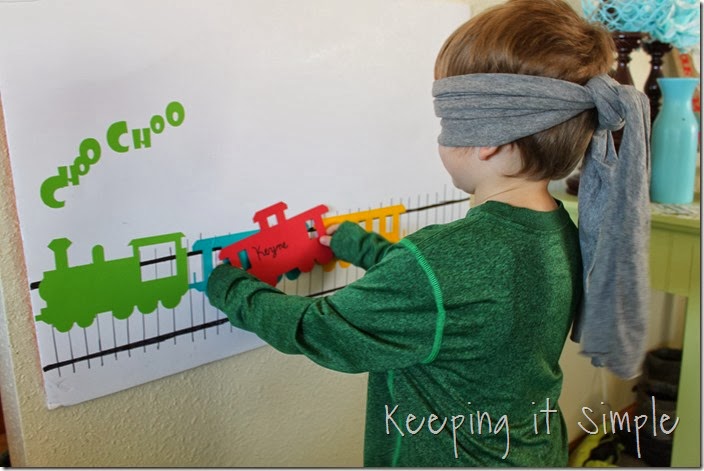 Then next game was toss the coal in the engine.  I just drew and painted a box, cut out a window and then make coal bean bags out of black felt.  I just glued them together with a glue gun and filled them with beans. 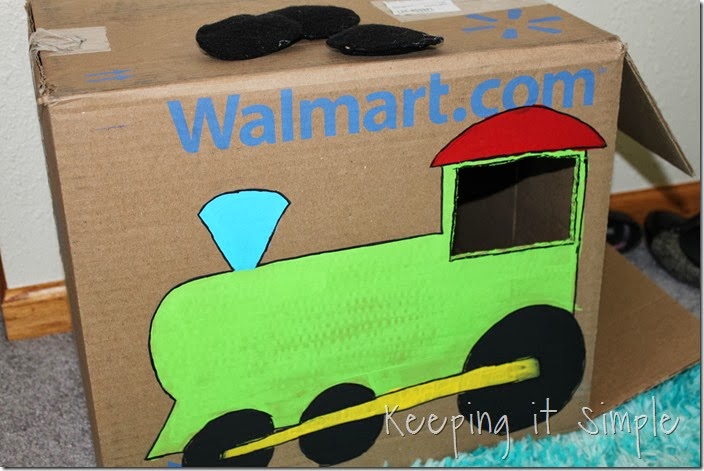 The kids LOVED this game!  There was one little boy that kept on playing, even after we were done. 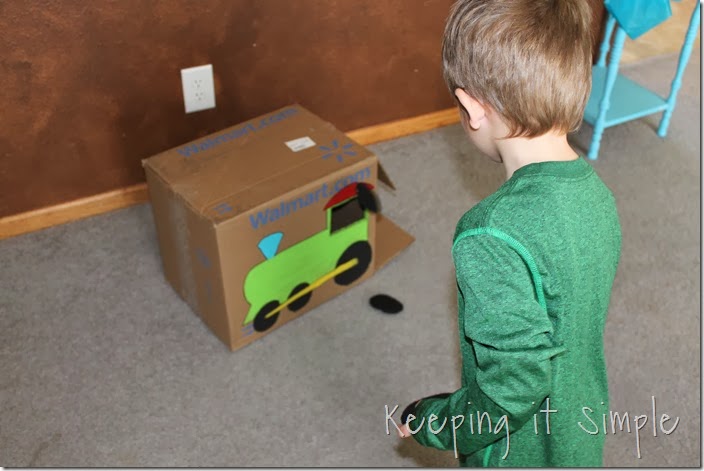 We also playing “hot coal”.  Just like hot potato but with the coal bean bag.  They passed the coal around until the music stopped. When the music stops, the one holding the coal is out. 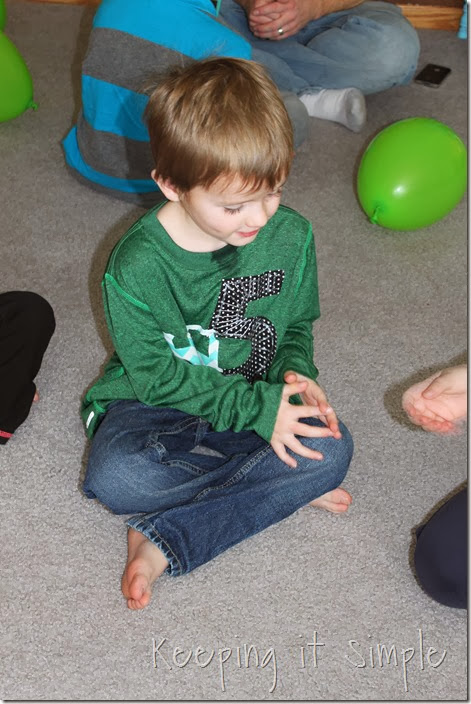 And last of all, we painted these awesome ceramic train banks.  The kids really enjoyed this.  I was a little nervous about having them paint, but it turned out really good. 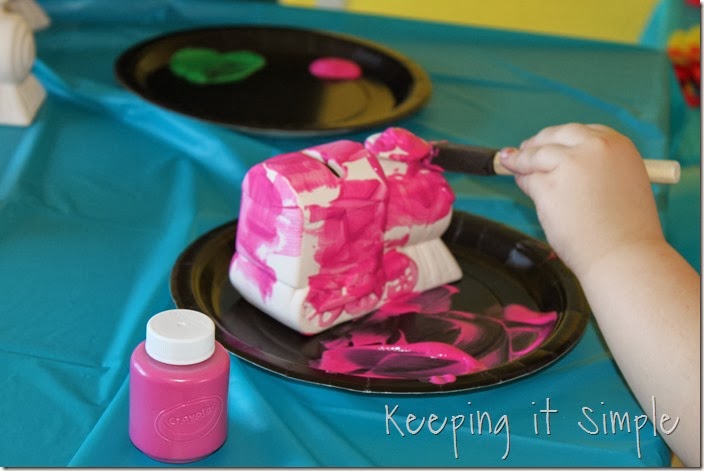 I just let them paint how ever they wanted.  I put the paint onto a plate and let them be creative.  They turned out really cute! 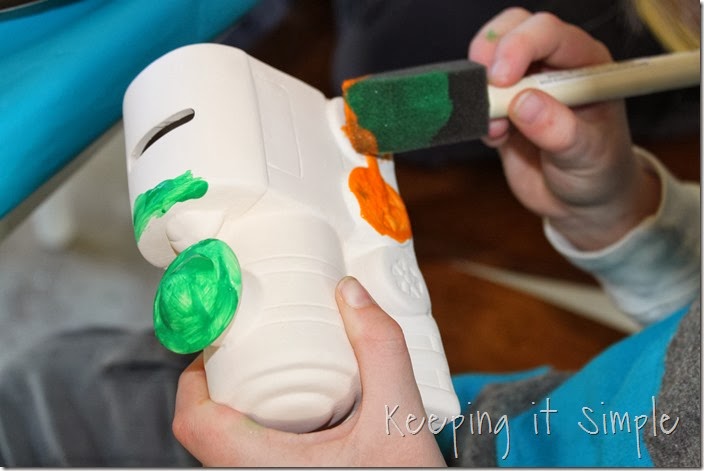 And last of all, here is the birthday train shirt I made my 5 year old!  I just cut out a big 5 with my Silhouette, ironed it on and then sewed it.  I did the same thing with the train.  And then I used some fabric paint and drew on tracks onto the number 5. 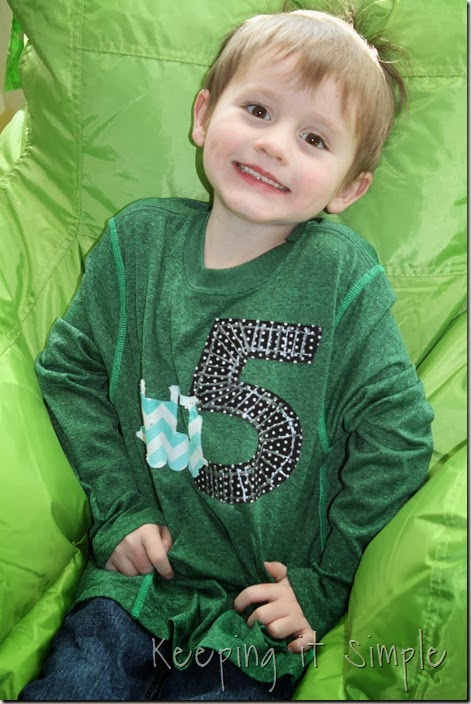 I had fun creating his birthday invitations too!  I made up a generic one that you can print out and use if you would like to too!  Get the printable here. 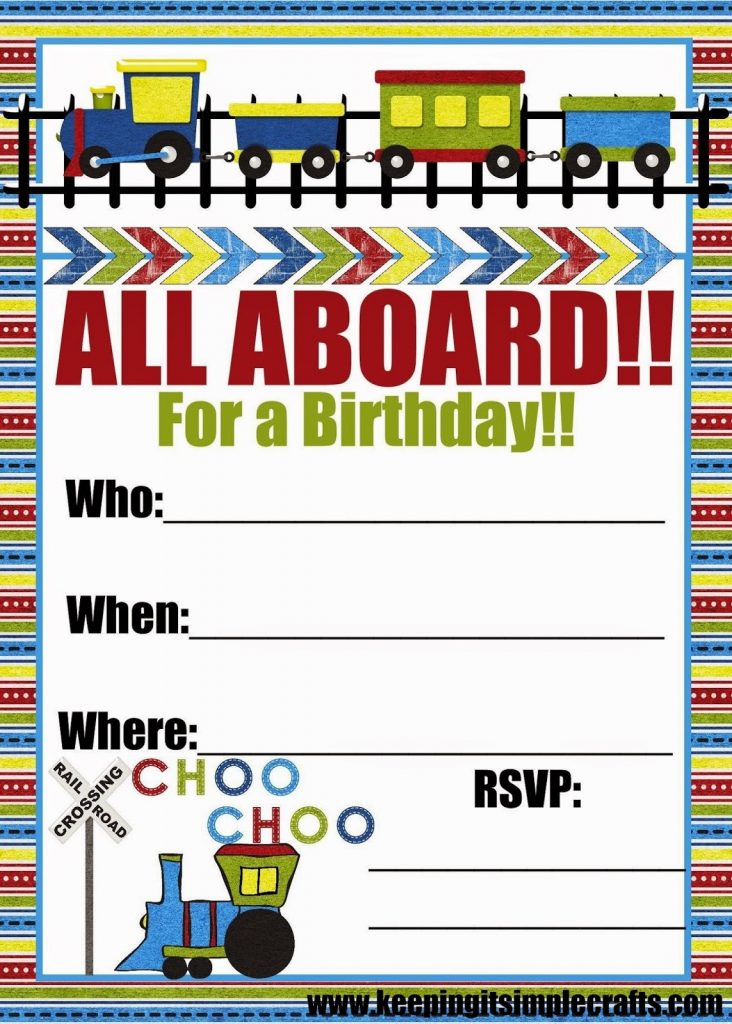 His party turned out to be a big hit!  Everyone had a great time.  If you have a birthday or a party coming up soon, make sure you check out Oriental Trading Company for supplies.  They have so much that I bet you can find what you are looking for!
I would love it if you followed along.