Family Costume Ideas- Round Up of Our Family Costumes
I love dressing up for Halloween.  I just love it!  I especially love dressing up as a family, in theme.  We have been doing it ever since my son was 2.  Sadly, it’s getting harder and harder every year because my kids all have their own likes and can’t seem to decide on one theme.  Who said that they could have an opinion?!  I will always cherish these fun times and the themes that we did!
So here are the past family costumes that we have done.  I’m going to start from the latest ones and go backward.  Trust me, there are some funny costumes and you might want to read the whole thing.  I was a little crazy way back when. 🙂
2018- Peanut Butter and Jelly Sandwich. This year I decided that if I couldn’t do themes with the whole family, then I will at least do a them with my husband.  So we went as peanut butter and jelly.  Just for fun, I added my oldest son to the costume, so we had a trio costume and went as a peanut butter and jelly sandwich.  I love how these turned out! 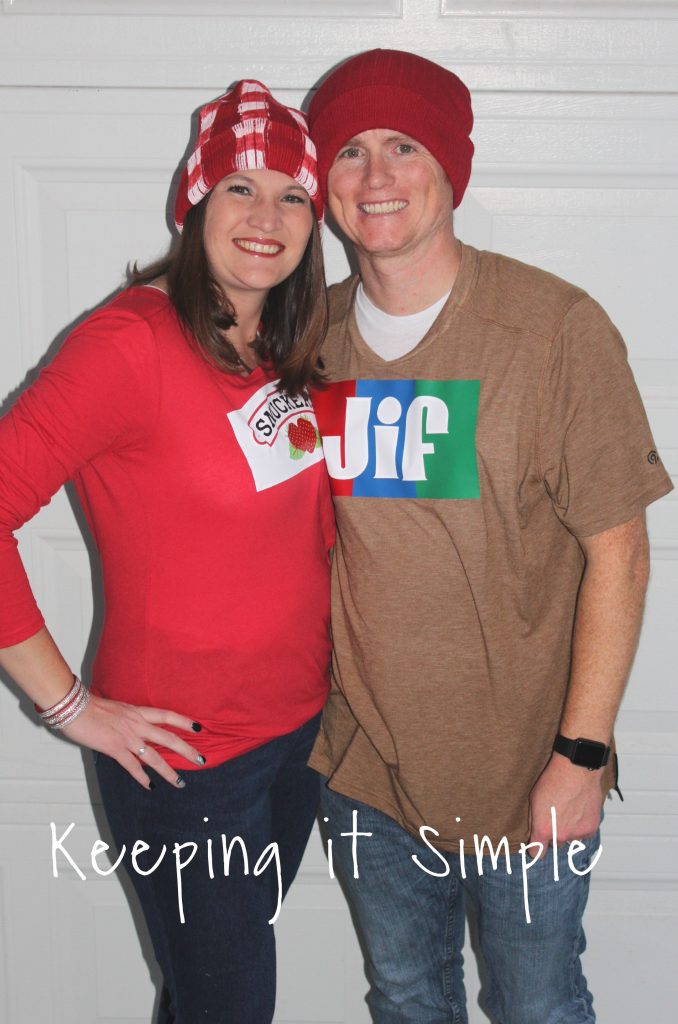 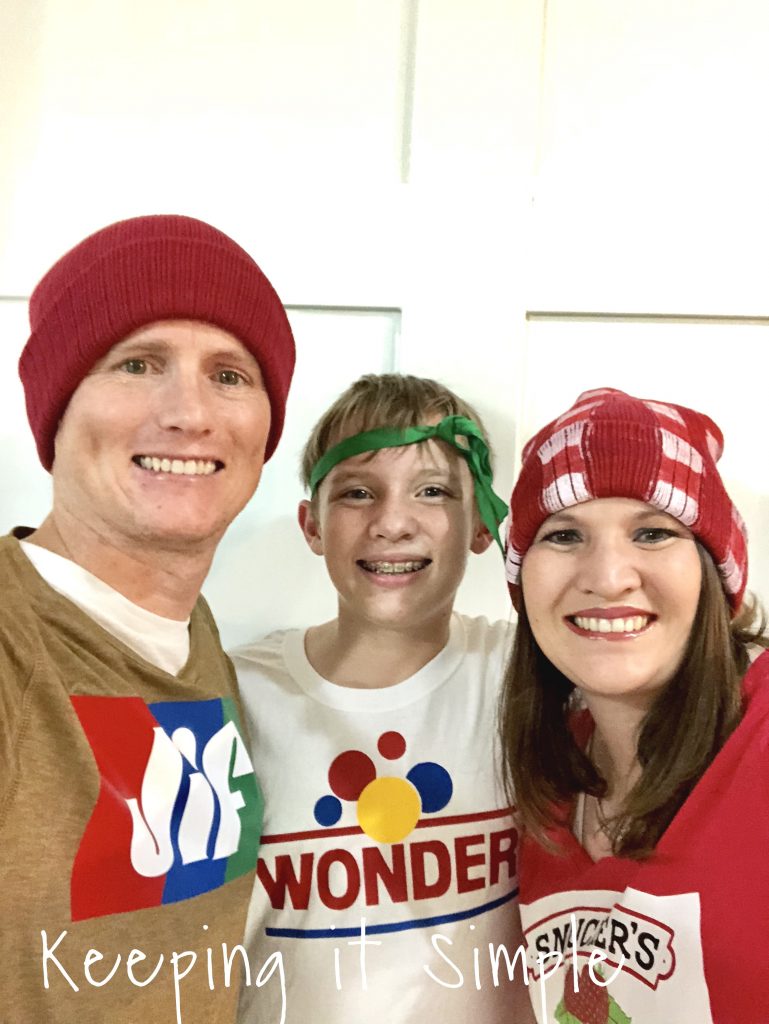 2017- Descendants 2– These costumes were so much fun to make!  The kids had a blast going as them and they were a huge hit.  I have tutorials for every single one of them, so check them out :). As you can see, we are missing two kids.  Two kids didn’t want to go with the theme. But we have Uma, Harry Hook, King Ben, Mal and Carlos.

2015- Frozen and Minecraft– This was the year that my daughter decided that she needed to be something girly, so we went with two themes.  The boys finally got their Minecraft costumes and my daughter finally got to be a princess! 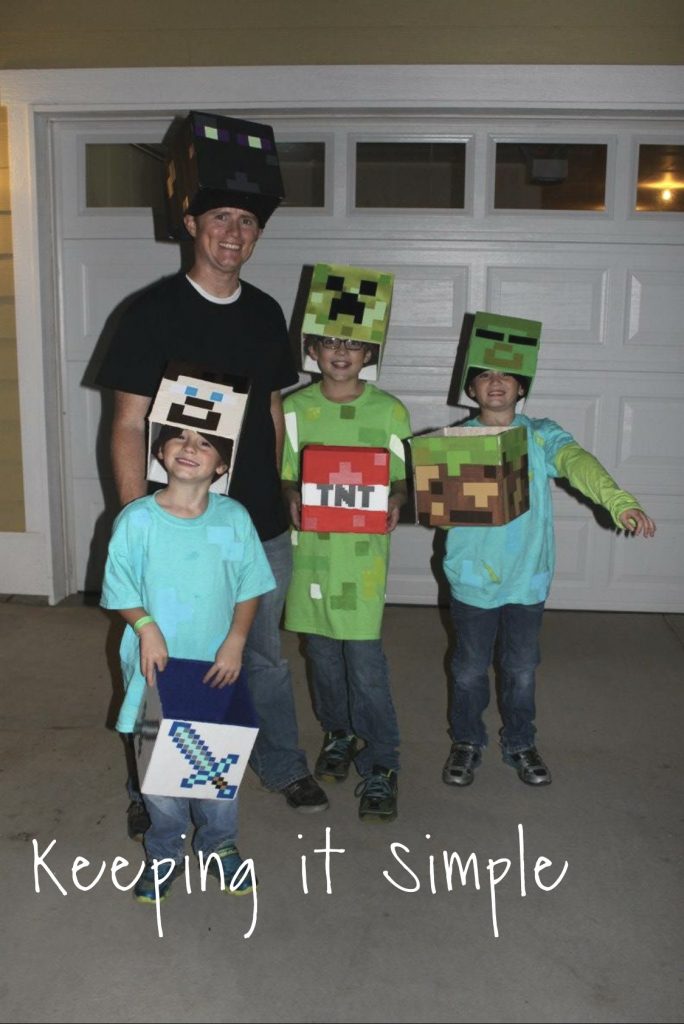 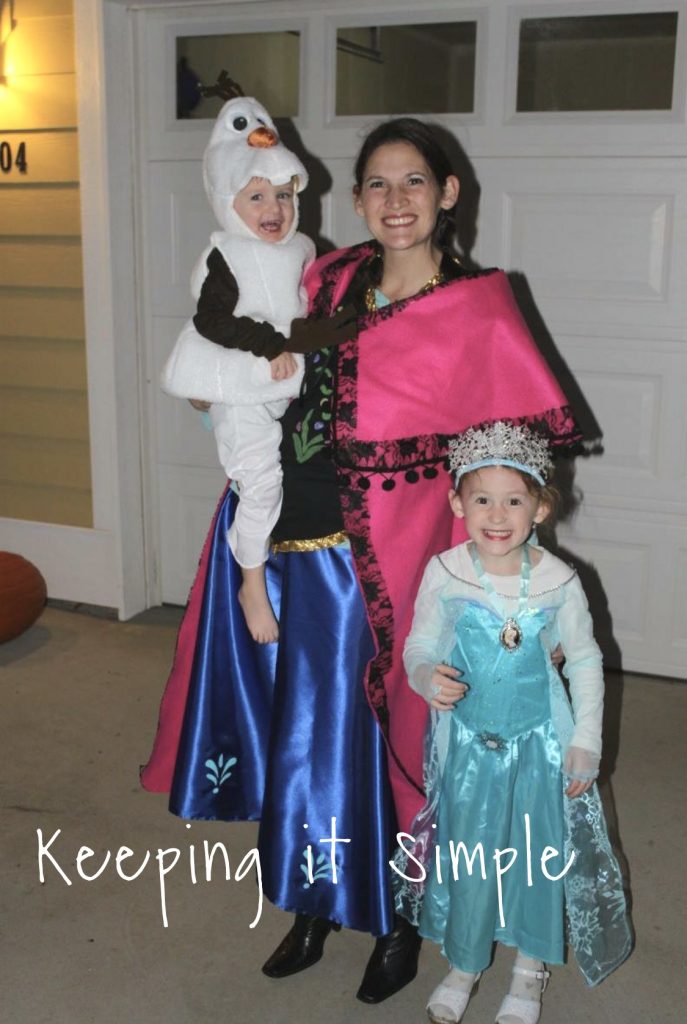 2014 Pokemon– This is actually one of my favorite family costume idea, they turned out so good and the kids loved it!  I have a tutorial for all of the different Pokemon characters, so check out the post to see how I made them all! These are the characters we were: Misty, Ash, Jigglypuff, Pikachu, Squirtle, Brock and Charizard. 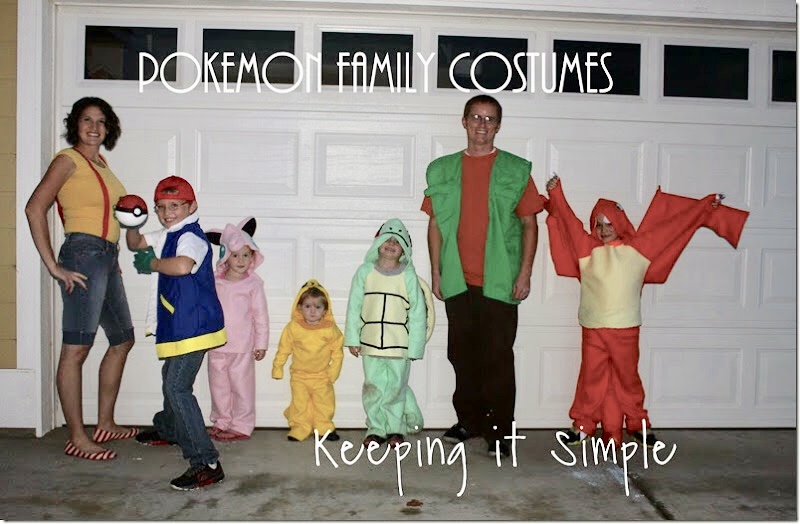 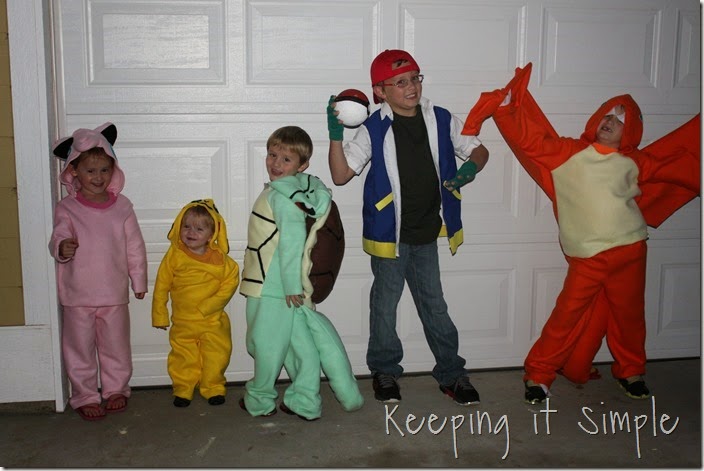 2013- Avengers. When you have a bunch of boys, you do more boy themed family costumes!  So Avengers was the theme for this year.  We had Black Widow, Iron Man, Thor, Captain America, Hulk, Agent Coulson and Hawkeye. 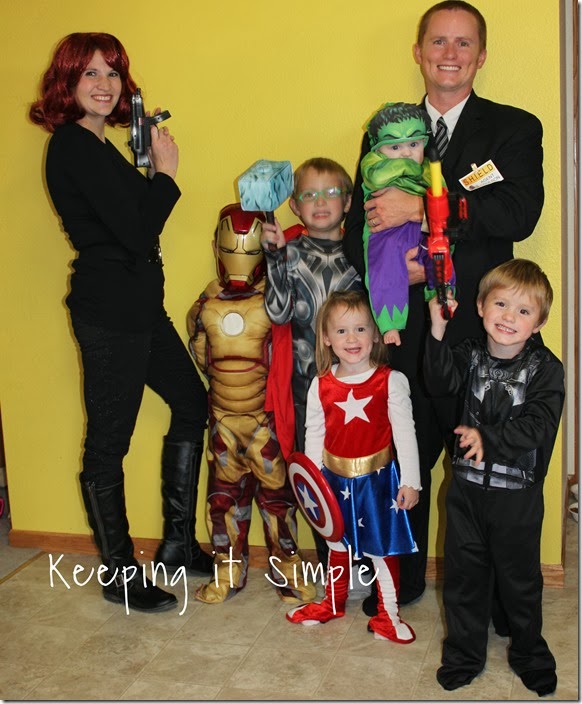 2012- Legos. These were so much fun to make and were a huge hit with the kids and the crowds!  They were super inexpensive to make too! 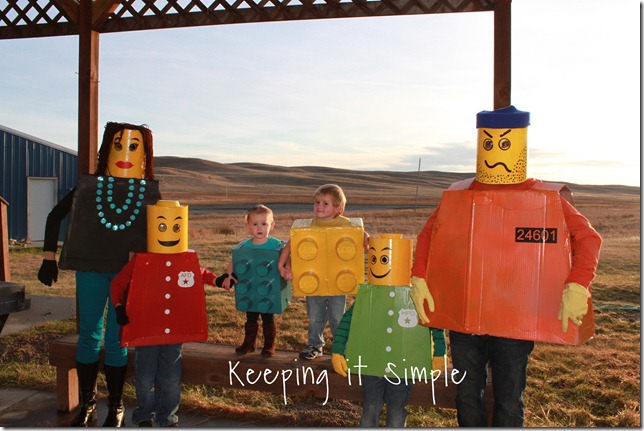 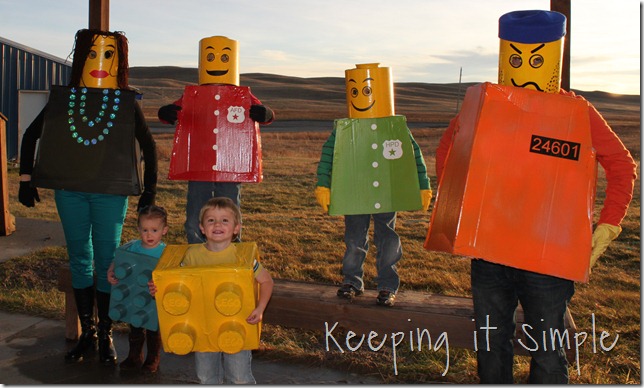 2011 Angry Birds.  These were a hit!  And the first time I ever made everyone’s costumes all for scratch. 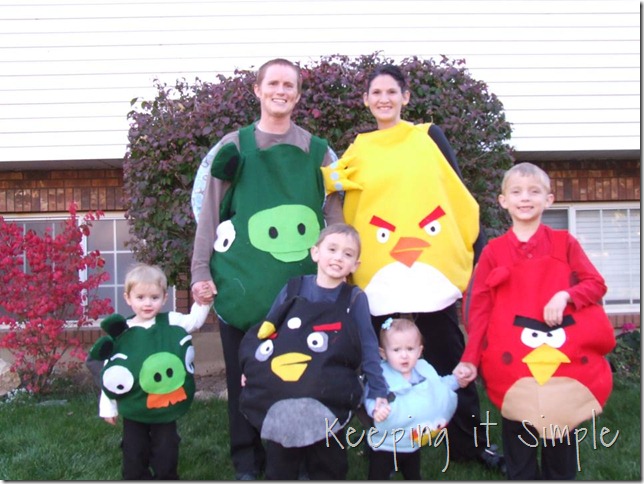 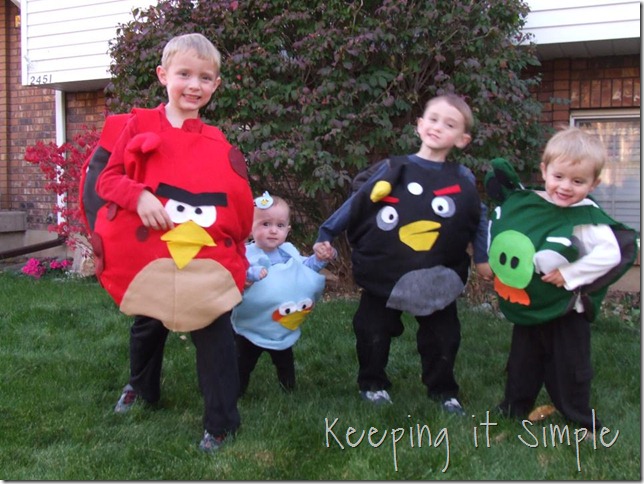 2010- Star Wars.  I had a baby two weeks after this…. these are not pretty pictures of me.  So in case you don’t know who we are: Yoda, Darth Vader, Anakin, Luke and Padme 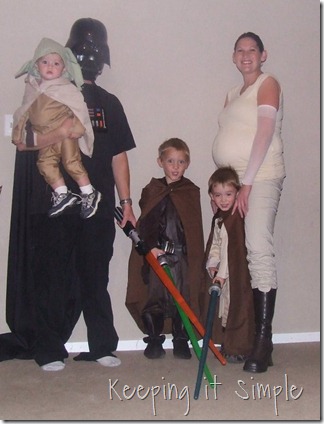 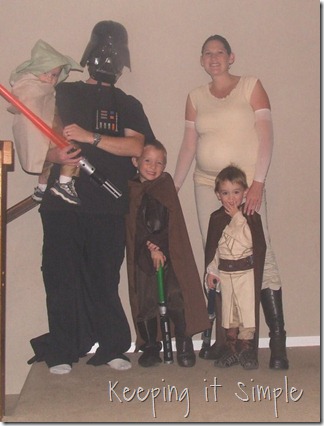 2009- Teenage Mutant Ninja Turtles.  This is my favorite one so far, mostly because I love TMNT.  I got rid of these yellow skinny jeans and now I’m kicking myself for throwing them out! 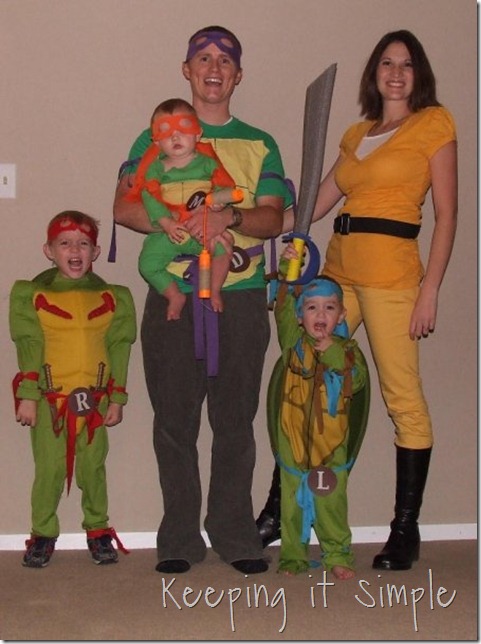 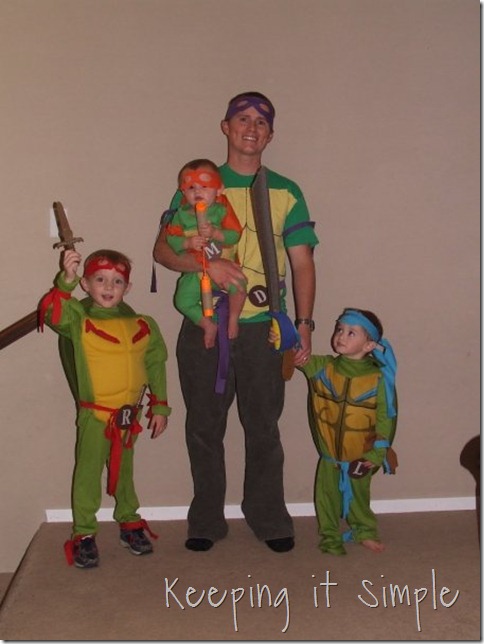 2008- Go Diego Go.  For this one, we actually dyed my son’s hair, with real hair dye.  It was weird to see him with dark hair.  The day after Halloween I buzzed it and within a month it was blonde again.  We are Baby Jaguar, Daddy Jaguar, Diego and Alicia. 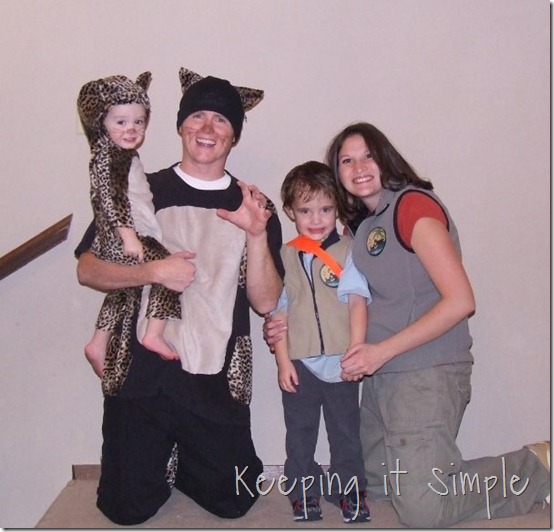 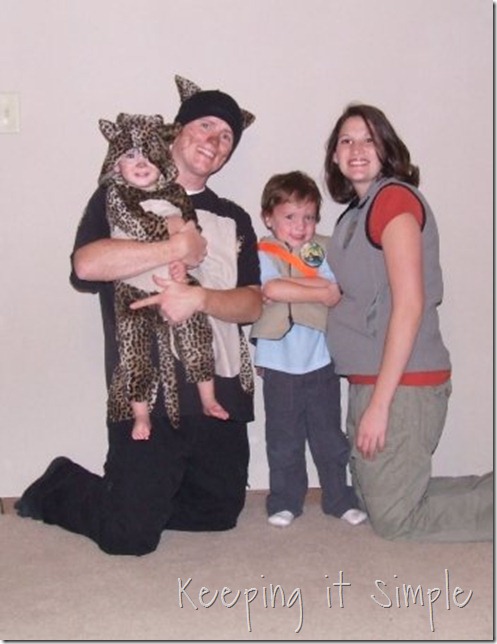 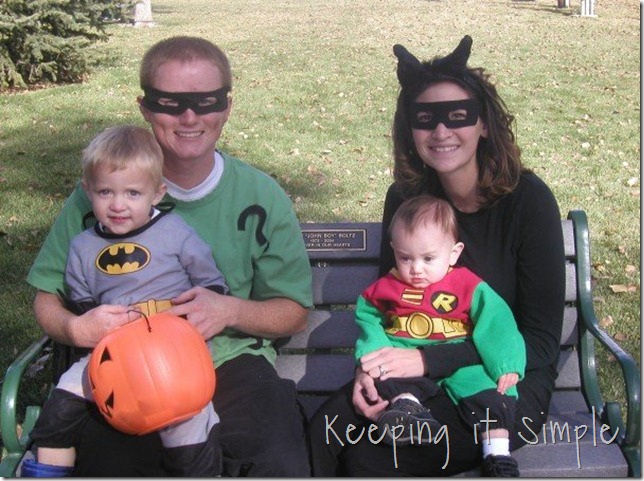 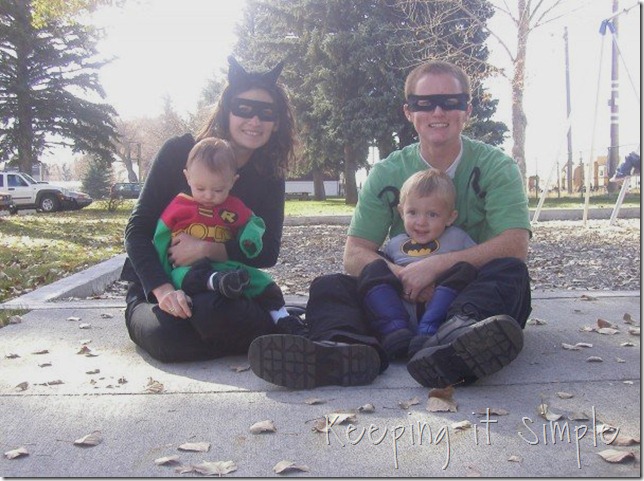 Sorry these were taken with my phone out of my scrapbook, digital cameras weren’t as popular back then….
2006- Sulley and Mike from Monsters Inc.  What do you do when you’re 8 months pregnant around Halloween? 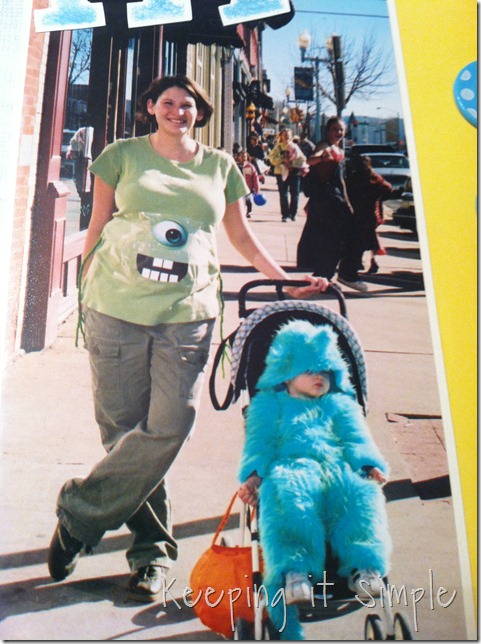 You turn your belly into a costume! 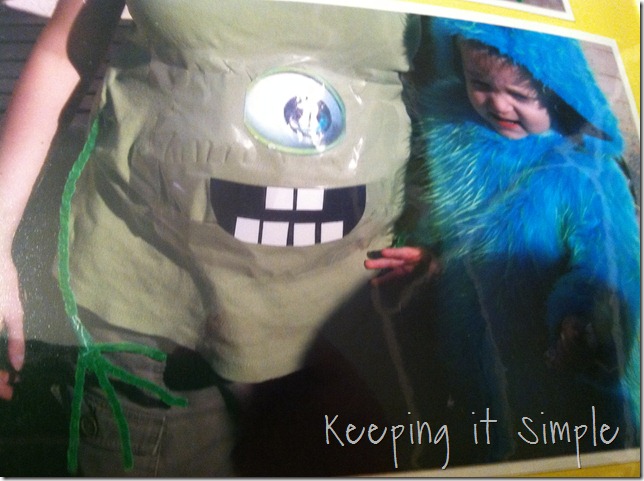 2003- Our first Halloween as a married couple.  Care Bears.  In a way a feel a little bad for making him go as a Care Bear, it’s just a little girly.  But he was a trooper and put up with me.  Seriously, we look so young in this picture!! 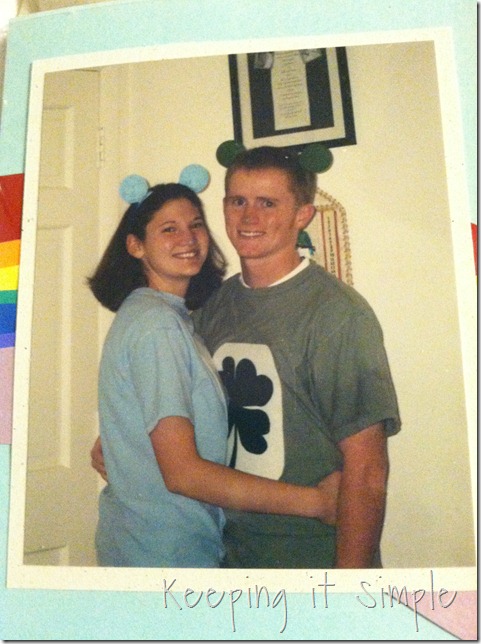 And last of all, I have to share this one with you because it might be my craziest costume ever.
2002- Freshman year of college.  Batman crew.  I went as the Joker.  And went all out, with the green hair and white face. 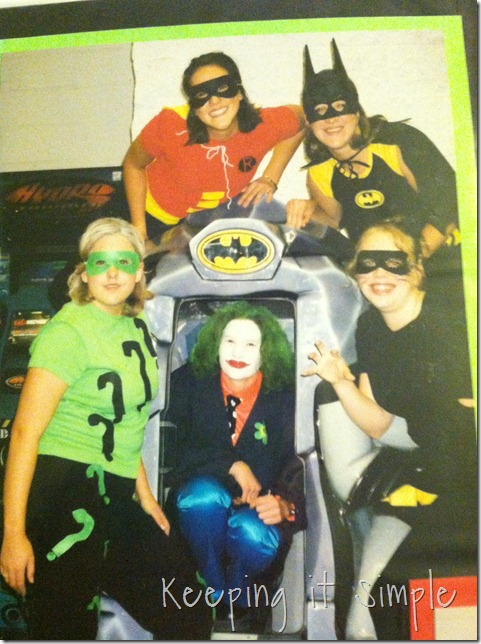 See how cute everyone else looks, and how normal?  I don’t know what I was thinking.  I’m pretty sure I came up with the idea to be Joker, I volunteered.   Wow, just wow.  But it was an awesome night and we had so much fun.  We even went to Walmart and got pictures done.  Yup, everyone was staring at us!  It was awesome though! 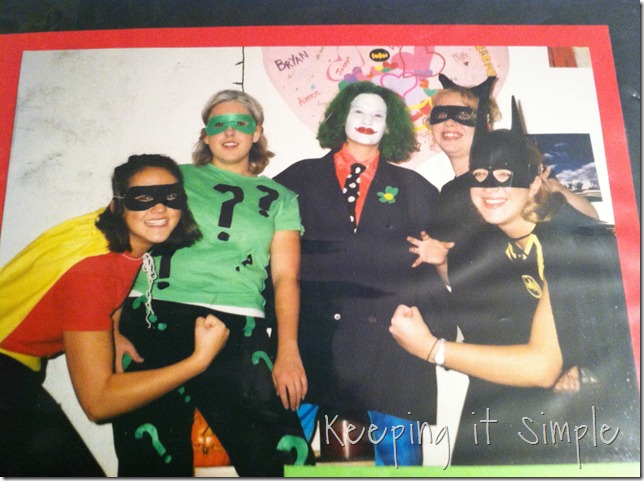 And there you have it, the 10 years of Halloween of our family.  I hope you enjoyed it as much as I enjoyed sharing it with you!
I would love for you to follow along